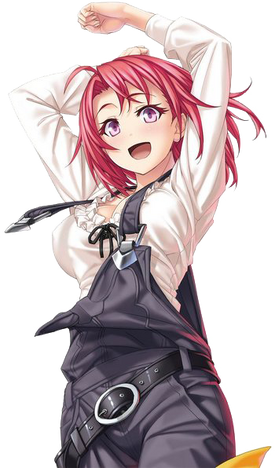 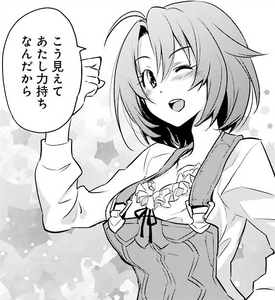 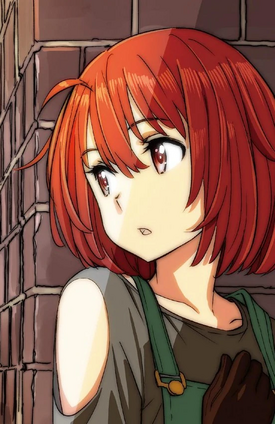 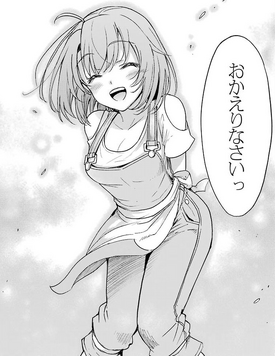 Cow Girl (牛飼娘, Ushikai Musume) is the childhood friend of Goblin Slayer and a farm hand on her uncle's farm. Her uncle took her in on his farm after her family was massacred by goblins during her childhood.

Cow Girl is a young woman with rose-colored eyes and short red hair. Working on a farm since childhood has given her an athletic yet voluptuous body. She is often seen wearing a long-sleeved shirt, black overalls and black work boots.

Five years before the main plot, she had long hair that she would hide her eyes behind. She eventually cut it short after a suggestion from Witch.

Cow Girl is a calm yet cheerful person, especially when it comes to Goblin Slayer.

Before she reunited with Goblin Slayer, she was often sullen, always wishing she was able to be with her best friend again. She feels guilt at not being there for him when their village was destroyed and tries to bring part of his former self back.

Cow Girl is the childhood friend of Goblin Slayer and her uncle took her on his farm when she was eight years old. She is the only other survivor of her hometown besides Goblin Slayer, by virtue of working out of town just before the goblin horde attacked.

Five years later, Cow Girl was looking at all the people entering the city to become adventurers when she briefly spotted what she suspected to be her childhood friend. Later, she saw him again and rushed toward him to confirm her suspicions. She became overjoyed to see that she was right and managed to convince her uncle to let him stay at the farmhouse.

Wanting to know more about adventurers, Cow Girl uses her uncle's delivery to the town to go to the Adventurer's Guild. Intimidated by the amount of adventurers, she was caught off guard when Guild Girl greeted her. Flustered, Cow Girl managed to tell her that she was from the farm and that she would start coming here to help her uncle.

After waking up to greet Goblin Slayer, Cow Girl went with him to the Adventurer's Guild to make a delivery. Shortly after they arrived, the surrounding adventurers openly displayed their contempt for Goblin Slayer, which Cow Girl, along with Guild Girl, became irritated with. Upon seeing Priestess, she was surprised to see that Goblin Slayer had acquired a companion. After returning to the farm, her uncle told her that Goblin Slayer was not the same person as he was in the past, and that it would be better to avoid him. Cow Girl simply responded that she was going to wait a little longer.

When Goblin Slayer realized that a horde of goblins were going to attack, Cow Girl was urged to flee to the town. Despite the risk, Cow Girl refused to abandon the farm which she saw as the only place she and Goblin Slayer to come home to. Once Goblin Slayer defeated the goblins alongside the town's adventurers, Cow Girl and her uncle attended the subsequent festivities.

Cow Girl caught Goblin Slayer attempting to sneak into the farmstead unnoticed. After making him greet her properly, she watched as he was making egg bombs. Cow Girl asked if he was able to take a break the next day, only to learn that Guild Girl had called him in.

A day before the Harvest Festival, Cow Girl and Goblin Slayer noticed that the fragrant olives were blooming; Cow Girl asked him if he knew what they meant in flower language, which Goblin Slayer was unable to recall. Goblin Slayer then told Cow Girl that he was going on a date with Guild Girl during the Festival. Acknowledging that she beat her to it, Cow Girl asked what time he would go; upon finding out the date was at noon, Cow Girl asked to take him out for the morning. She jumped for joy after he accepted, explaining that they haven't went to a festival in ten years. During their date, Goblin Slayer found and gifted her a ring. While they drank lemonade, she was about to offer her left hand, but asked him to put it on her right ring finger.

After the Festival, Cow Girl was cleaning Goblin Slayer's ears outside the farm when his party arrived to inform him of a goblin quest. Before Goblin Slayer left, he told her that he researched the meaning of fragrant olives, but stated they didn't fit him. Once he left, Cow Girl, knowing the flowers represented purity, humility, true love and first love, murmured that they fit perfectly.

Retrieved from "https://goblin-slayer.fandom.com/wiki/Cow_Girl?oldid=20452"
Community content is available under CC-BY-SA unless otherwise noted.