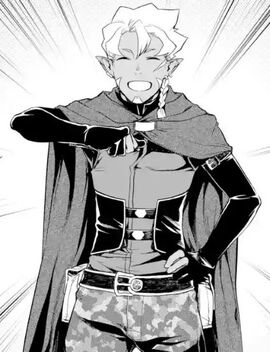 Half-Elf Scout (の斥候, Hāfuerufu no Sekkō) is one of the main characters of Goblin Slayer Side Story II: Dai Katana.

He is one of the six gold-ranked adventurers renowned for defeating the Demon Lord ten years ago.

Half-Elf Scout has white hair tied into a braid in the back and a dark line located underneath his left eye. He dons a green cloak over a grey vest, camouflage leggings, and boots.

At Fortress City, Half-Elf Scout, Female Wizard and their captain discussed how to challenge the Dungeon of the Dead; Half-Elf Scout noted that they needed more people and suggested that they find two more frontline fighters along with an additional magic user. After seeing a a nearby appraiser being harassed, he watched as the party captain stepped up to defend her before Knight of Diamonds deescalated the conflict. During the process of recruiting the appraiser, Half-Elf Scout told her of his goal to unearth the dungeon's secrets. He then went with the party to the Temple of the God of Trade, where he watched the captain prepare to spar with their next recruit.

Retrieved from "https://goblin-slayer.fandom.com/wiki/Half-Elf_Scout?oldid=20830"
Community content is available under CC-BY-SA unless otherwise noted.