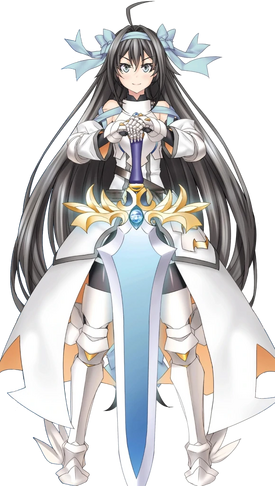 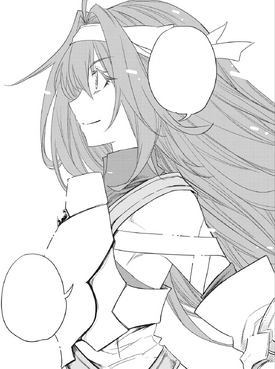 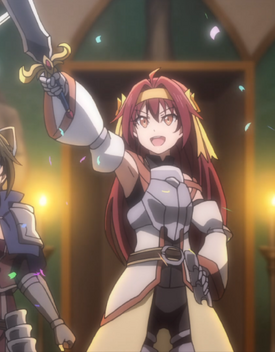 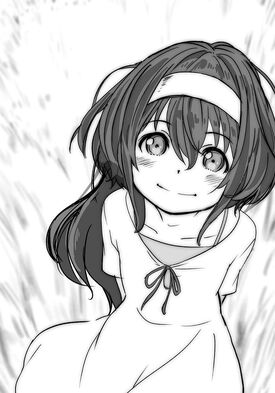 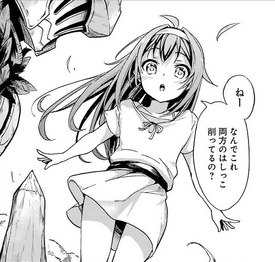 Hero (勇者, Yūsha) is a young girl who became a platinum-ranked adventurer after defeating the Demon Lord. Along with her party, she battles the Demon Lord's forces and other powerful threats.

Hero has dark cyan-colored eyes and long black hair, with a single strand pointed upward, decorated with a light blue headband with bows at the ends. She wears white robes along with silver chest-plate armor, gloves and boots.

Hero's most noteworthy feature is that she is armed with a large holy sword that indicates her status as a hero.

In the anime and Year One manga[1], she has dark red hair with apricot-colored eyes, and wears a yellow headband.

Hero is a brave, outgoing yet impulsive tomboy, shown when she deliberately gave away her party's location in favor of a bold introduction. Though she may come off as arrogant, her confidence is backed up by her extraordinary abilities and accomplishments, including the recent slaying of the Demon Lord[2], numerous members of the Evil Sect and other powerful Non-Prayer Characters.

In spite of these traits, Hero is a friendly individual towards her allies as well as fellow strangers. She is also wise enough to recognize goblins as threatening and vicious creatures.[3]

Goblin Slayer Side Story: Year One

As a child, she snuck out of the orphanage to go play outside the village, much to the head nun's exasperation. She met Goblin Slayer outside the village when he first arrived and followed him around, asking him several questions while he was setting up defenses. After heading to bed, she had a dream that she was a hero who held a holy sword in her hand.[4]

While taking on a quest to kill goblins in a cave, she found herself in ancient ruins of a temple, where a general of the Demon Lord resided. Confronting the general after slaying his army of monsters, her sword broke when she attempted to stab him. Fortunately for her, she pulled out a powerful sword buried in a nearby pedestal and effortlessly killed the general. She went to make her quest report, where she learned there were more generals and the sword she wielded was a sword of light.[5] Following the guidance of this legendary weapon, she slayed the Demon Lord, which allowed her to become the tenth platinum-ranked adventurer.[2][Note 1]

Hero and her party confronted a member of the Evil Sect. When the servant asked them how they found the sect's location, Hero dismissed it as good luck. Even after the servant transformed into a more monstrous and powerful form, Hero was still able to slay him.[6]

Hero came across Goblin Slayer setting up traps, and briefly interrogated him, while also remarking on his strange choice of equipment. After judging that he wouldn't be a problem, she ran off, much to the annoyance of her party.[7]

When Goblin Slayer's party was battling Dark Elf, Hero's party worked with Sword Maiden to enter the astral plane and kill the hundred-handed giant Hecatoncheir before it could be summoned to the physical plane. After taking a brief moment to reminisce on the festival, Hero killed Hecatoncheir with Sun Burst.[8]

After waking up, Hero told her companions that she experienced a premonition of a storm of chaos forming over a town during the festival. When the group deduced that the location was a specific town in the frontier, Hero exclaimed that location would be where their next adventure would be.[9]

In the Plane of Annihilation, Hero used her holy sword to disintegrate the evil spirits in front of her with one powerful slash. After she and her party returned to the normal world, Hero observed a village being built and thought about what could have been if she had grown up as a regular village girl or a typical adventurer. She then ran off to the village to ask where they were, which turned out to be the adventurer's training ground.

When the gates to hell opened, Hero's party was there to intercept the oncoming demons and close the gate. While Sage worked to seal the gate, Hero slaughtered demon after demon with her spells and holy sword. Eventually, Hero came face to face with a giant spider creature and vanquished it with a critical hit.[10]

Having been called by The King, Hero makes an abrupt entrance to his council of advisers. Upon being informed of a meteorite that fell onto the holy mountain, Hero correctly guessed that she was assigned to investigate it. Before setting off, she asks the attending Gold-ranked padfoot to tell her the rest of the story about one of his adventures.[11]

She and the party discovered that a lump of darkness had latched onto the meteorite, and was set on expanding itself. After seeing a goblin corpse fall onto the mountaintop, Hero resolves that since a goblin hunter was doing his part, they'd better do theirs. With her sacred sword, she produces an explosion of sun that destroys the lump.[12]

Hero is a powerful adventurer with exceptional skills and abilities. She is able to effortlessly kill powerful minions of the Demon Lord, along with the Demon Lord himself.

Retrieved from "https://goblin-slayer.fandom.com/wiki/Hero?oldid=20098"
Community content is available under CC-BY-SA unless otherwise noted.