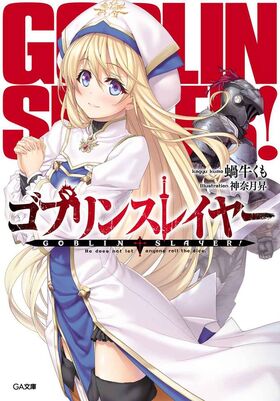 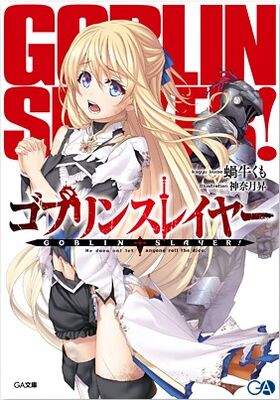 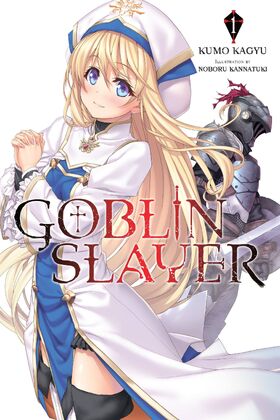 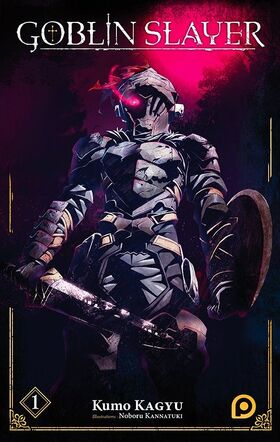 Goblin Slayer! Volume 1 is the first light novel volume in the Goblin Slayer! series, released on February 15, 2016. In a fantasy world where goblins are considered the weakest of prey, it revolves around one man known as 'Goblin Slayer' determined to exterminate goblins.

What is his story? Why is he so obsessed with destroying goblins? One young Priestess of the Earth Mother is about to find out, when she gets taken under his wing.

A young priestess has formed her first adventuring party, but almost immediately they find themselves in distress. It's the Goblin Slayer who comes to their rescue—a man who's dedicated his life to the extermination of all goblins, by any means necessary. And when rumors of his feats begin to circulate, there's no telling who might come calling next...
- Yen Press

Once upon a time, in the days when the stars shone far fewer in the sky than they do now...

The gods of light and order and destiny vied with the gods of darkness and chaos and chance to see who would control the world. This struggle took place, not in battle, but with a roll of the dice.

At long last, the gods tired of dice. Thereupon they created many creatures to be their playing pieces and a world in which to play. Humans and elves and dwarves and lizardmen, goblins and ogres and trolls and demons.

At times they adventure, sometimes gaining victory, other times suffering defeat. They find treasure, become happy, and in the end, they die.

Into this world, there appeared one particular adventurer.

He will not save the world.

He will not even change anything.

After all, he is just another pawn, such as you might find anywhere...

Retrieved from "https://goblin-slayer.fandom.com/wiki/Light_Novel_Volume_1?oldid=21990"
Community content is available under CC-BY-SA unless otherwise noted.