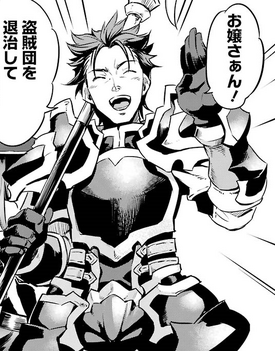 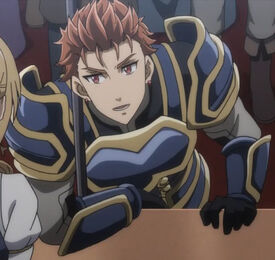 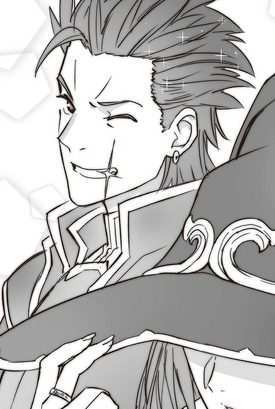 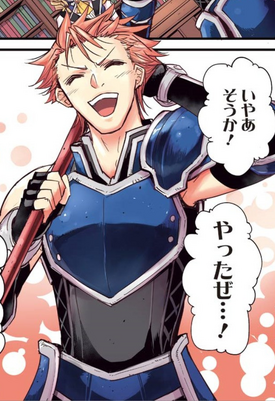 Spearman (槍使い, Yaritsukai) is a silver-ranked adventurer who is based in the frontier and is partnered with Witch.

Spearman is confident in his fighting abilities and always presents himself as a courageous warrior when trying to impress women, mostly Guild Girl.

Unlike some adventurers, he has a sense of justice that pushes him to do what's right, even when there is little monetary gain. He is also popular with rookie adventurers in part due to his ranking and because he's seen helping in weapons training. Despite his outward appearance, he's good at looking out for others.

Spearman registered on the same day as Goblin Slayer. He is often accompanied by his party member, Witch.

Upon seeing Goblin Slayer, Spearman expressed disgust, which in turn led the other adventurers at the guild to mock him as well.[1] On multiple occasions after completing a quest, Spearman bragged to Guild Girl about it only for her attention to move onto Goblin Slayer.

When Goblin Slayer asked the adventurers in the guild to help defend the farm against a Goblin Lord, Spearman initially rejected his request, stating that for an adventurer to do anything, a reward had to be given in return. However, after Goblin Slayer offered everything he had as well as his life, an exasperated Spearman agreed to help, only asking for a drink.[2] In the subsequent battle against the Goblin Lord's army, Spearman led a group of adventurers to kill the goblins riding wolves.

Due to the lack of qualified adventurers, Spearman joins Heavy Warrior and Goblin Slayer in a temporary party to investigate a mysterious tower. There, they confront many gargoyles summoned by the Evil Wizard within it, before killing the wizard by throwing him off the tower.[3]

As a silver-ranked adventurer, as well as being known as the "Frontier's Strongest", Spearman is a powerful warrior with years of experience in fighting monsters and exploring.

Retrieved from "https://goblin-slayer.fandom.com/wiki/Spearman?oldid=21643"
Community content is available under CC-BY-SA unless otherwise noted.