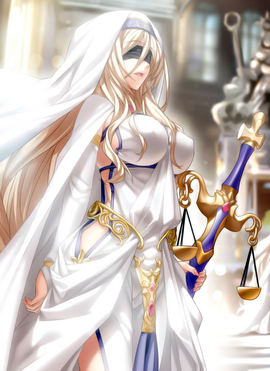 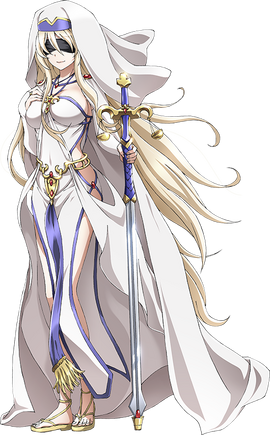 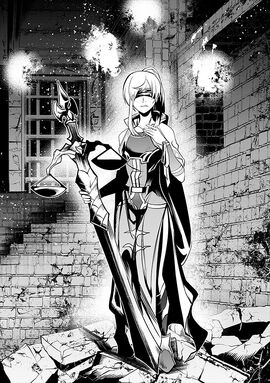 Sword Maiden (剣の乙女, Tsurugi no Otome), formerly known as High Priestess (女司教, Onna shikyō)[2][1], is a former gold-ranked adventurer who currently serves as the Temple of Law's Archbishop of the Supreme God.

Sword Maiden is a very beautiful woman with floor-length blonde hair and pale blue eyes that are often covered with by a black blindfold, along with a voluptuous body.

She wears white robes with blue outlines and a golden decoration around her hip. Her body is covered in several faint white lines that have all mostly healed by the time the events of the story takes place. However, her eyes have healed to a lesser extent.

Sword Maiden is a calm and compassionate woman who doesn't normally get upset with others. However, this masks the depression and anxiety beneath her exterior, as the trauma that was born from her experience as a captive of goblins follows her to this day. It was only thanks to meeting Goblin Slayer that it has lessened.

Sword Maiden demonstrates a capability for being quite childish. Before the festival, she was seen kicking and turning in her bed when told to get up, wanting to go to the festival rather than her Archbishop duties. She perked up when Goblin Slayer was mentioned, but fell right back down when her duties were brought up again. [3]

Sword Maiden was an adventurer captured by goblins on her first adventure and tortured mercilessly. Yet, she somehow escaped and worked as an appraiser in Fortress City until the events of Goblin Slayer Side Story II: Dai Katana where she began work as an adventurer once again.

She made her mark in history ten years ago by defeating the Demon Lord along with five other adventurers, becoming a renowned hero.

High Priestess was confronted by two adventurers who wanted her to appraise their equipment. After evaluating their gear as poor, the adventurers demanded she give them the "real" evaluation; when she could not, the adventurers compared the look on her face to when she was attacked by goblins. When one of them made an advance toward High Priestess, suggesting another line of "work", the leader of another party stepped up to confront them. Once they were deterred, the leader offered High Priestess a position in his party.[4] When the party made their way to a temple, Female Wizard helped her pick out a black blindfold, and High Priestess blushed after receiving a compliment from the party leader. At the temple, she looked on confusedly as the party leader prepared to duel with the next recruit.[5]

On the ninth level of the Dungeon of the Dead, High Priestess and her party debated on whether to go back or to advance to the tenth level and face the Demon Lord. When the leader asked for her opinion, High Priestess told them she wanted to keep going, as there may not be a next time. With the party resolving to advance, High Priestess was certain the world would be saved.

Having heard of Goblin Slayer’s achievements, Sword Maiden enlisted him and his party to slay goblins infesting the sewers underneath Water Town, the city her temple oversees.

However, once they destroyed the portal allowing the goblins through, Goblin Slayer approached Sword Maiden and proclaimed that she knew the circumstances behind the goblin nest in the sewers, as he had concluded the alligator in there was a familiar. Sword Maiden admitted she took baths to cover the wounds and stench she shared with the alligator and apologized for not showing her best side to his young friend. She added that although the Demon Lord forces behind everything were vanquished, there were still goblins beneath the town; she wanted the people to fear the goblins as she did, but ultimately, nobody was able to. Sword Maiden asked Goblin Slayer if he shared her feelings, and was deeply saddened to hear his blunt denial. However, he promised that he will slay any goblins upon request, including the ones in her dreams. Moved to tears of joy, Sword Maiden exclaimed that she cherished him.[6]

Unable to go to the festival, Sword Maiden pouted and refused to get up from her bed to attend to her duties as an archbishop, which displeased the nun asking her to do so. She briefly beamed at the mention of Goblin Slayer, but slumped back down after her responsibilities were brought up again, much to the nun's exasperation.[3]

She later worked with Hero in the astral plane to slay the beast Hecatoncheir before it could be summoned by Dark Elf.[7]

She had a conversation with The King regarding the recent crises occurring around them as well as reminiscing old times and how they struggle with their new positions. [8]

In a letter sent to Goblin Slayer, Sword Maiden informed that she had no dreams of goblins since their last encounter, thanking him and his party for it. She then asked him to take a quest to find a noblewoman who had gone missing slaying goblins.[9]

During a conversation with Noble Fencer, Sword Maiden asked her what she thought about Goblin Slayer. Upon hearing that Noble Fencer merely thought that she owed him her life, Sword Maiden smiled happily while walking with her.[10]

Sword Maiden was given several clay tablets by Goblin Slayer for her to decipher. She was unable to, but offered to take them to the library for further study. Sword Maiden asked if Goblin Slayer could come back soon, only to learn that he was obligated to leave south for a wedding. Before he left, Sword Maiden warned him to be careful traveling the river.[11]

In the library, Sword Maiden and an acolyte of the God of Knowledge deciphered the tablets and learned of a powerful foe that threatened all creation. As Sword Maiden went to prepare a letter to The King and the chief of the elves, she stated that if Goblin Slayer could save the people, they had to save the world.[12]

Back when she was an adventurer, High Priestess and her party defeated greater demons in the Dungeon of the Dead's ninth level, after which she began mapping the area. To herself, High Priestess whispers that she was relieved that their opponent wasn't goblins, though she didn't allow her party to hear her words.

In the present day, Sword Maiden was obliged to participate in The King's council at the capital, but the appearance of tattooed goblin riders prompts her to hire Goblin Slayer's party as bodyguards. When they camp for the night on their way to the capital, Sword Maiden is consoled by Goblin Slayer after she experiences a flashback of her ordeal with goblins. She is quickly brought back to the carriage when they sense the presence of goblins, and Sword Maiden silently wishes for none of them to live. Once they reach the capital gates, Sword Maiden's presence allows them quick entry. When the group learns that Priestess' armor was stolen, Sword Maiden asked Goblin Slayer to comfort the young girl and decided to bring it up during the council.

At the king's council, Sword Maiden informs the king of the theft, which the latter promises to look into. When they get word that the princess was kidnapped by goblins, Sword Maiden deduces that the goblin nest was located in the Dungeon of the Dead. As she was one of the six adventurers who successfully challenged the dungeon, Sword Maiden is pressured by the king and his advisers to rescue the princess. Right before she is forced to accept, Noble Fencer arrives with Goblin Slayer's party, who are willing to accept. Before they set off for the dungeon, Sword Maiden gives Goblin Slayer a Blue Ribbon, a key that would allow them further entry into the dungeon. Noble Fencer asks her if she ever wished to be an adventurer again, to which Sword Maiden replies that she no longer had the courage to face her fears. When the two went back to the castle, Sword Maiden wishes all the goblins would disappear.

Sword Maiden later burst into the dungeon with a group of warrior-priests to kill the remaining goblins, announcing that their enemy were Non-Prayers who sought to summon demons. Sword Maiden is barely able to hold herself up with her sword and scales confronting the goblins, and fixated her gaze on Goblin Slayer.

As a former gold-ranked adventurer, Sword Maiden is one of the most powerful humans on the planet. As an Archbishop, she also possesses both religious and political influence.

Retrieved from "https://goblin-slayer.fandom.com/wiki/Sword_Maiden?oldid=20765"
Community content is available under CC-BY-SA unless otherwise noted.